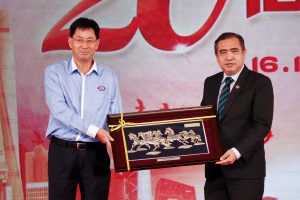 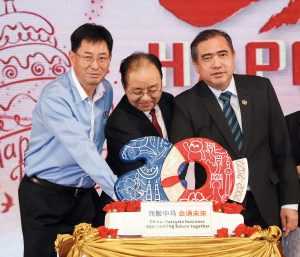 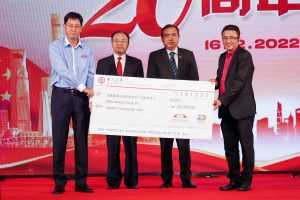 Ambassador Extraordinary and Plenipotentiary of the People’s Republic of China to Malaysia, H.E Mr. Ouyang Yujing, Minister of Transport of Malaysia, YB Loke Siew Fook, Minister Counsellor of the People’s Republic of China in Malaysia, Mdm Zhang PeiDong, Deputy Minister of International Trade and Industry, YB Liew Chin Tong, local government agencies, chambers and associations, medias from China and Malaysia and members from CECCM all gathered together to celebrate this meaningful event.

Minister of Transport of Malaysia, YB Loke Siew Fook said in his keynote speech, the newly formed government greatly welcomes China enterprises to invest and set up businesses in Malaysia. He knows that political stability is one of the important factors in promoting economic and trade development in both China and Malaysia, he promised to do his best to provide assistance to China enterprises who facing policy issues. He expects more China companies to invest in Malaysia in near future, especially in upgrading electronic services, improving public transport services and ensuring road safety, to further deepen the mutually beneficial cooperation between both countries.

H.E. Ambassador Ouyang Yujing expressed his heartfelt congratulations to the Chamber on its 20th anniversary. He said that the Chamber’s growth and development is the result of the joint efforts of its members and committe and is a vivid reflection of the flourishing bilateral relations between China and Malaysia. In 2022 January to November, China-Malaysia bilateral trade volume has exceeded USD 180 billion and is expected to exceed USD 200 billion. In the first half of the year, Chinese direct investment in Malaysia was US$11 billion, accounting for 55.6% of the total FDI absorbed by Malaysia. He believes that under the leadership of the new government, China and Malaysian enterprises will explore more development opportunities and help China-Malaysia trade and economic to achieve greater success.

President Zhang Min said that over the past two decades, CECCM has grown strong and healthily in Malaysia because of its good and friendly business environment. CECCM has also become more important in the economic and trade development of Malaysian and China enterprises, as well as in cultural exchanges between both countries. He assured CECCM will continue to forge ahead on the road to development.

Distinguished guests joined to celebrate and congratulate CECCM on its 20th Anniversary.

CECCM also donated RM20,000 to Tsun Jin Primary School Kuala Lumpur as an effort to give back to the society.

Based on the performance of our members in the past two years, CECCM has also selected 50 members to be awarded in category of the Best Corporate Award, Sustainability & CSR Award, Best Service Award and New Star Award.
The lucky draw was generously sponsored by our members with a wide range of prizes. The anniversary dinner received significant publicity by the mainstream media in China and Malaysia.