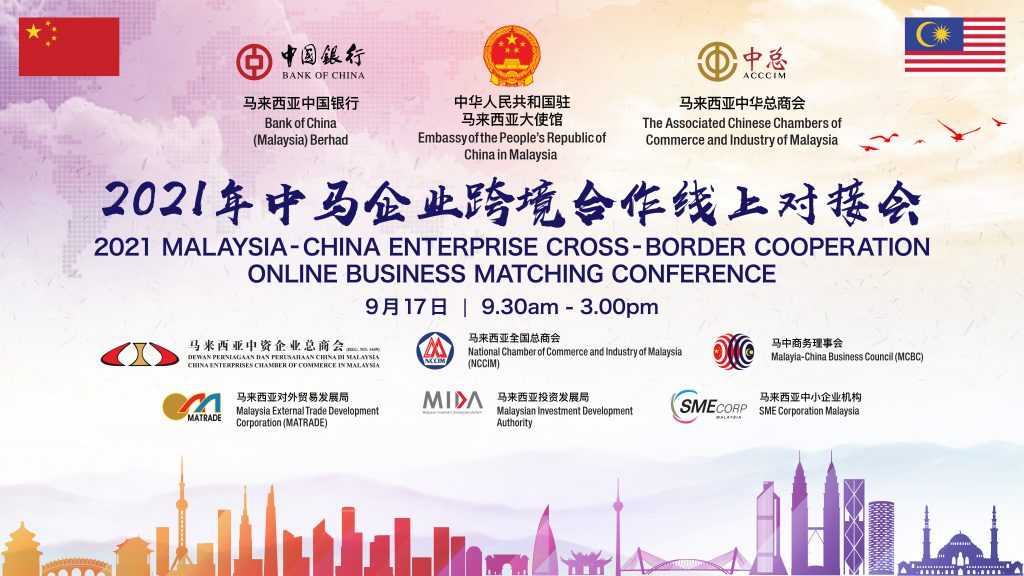 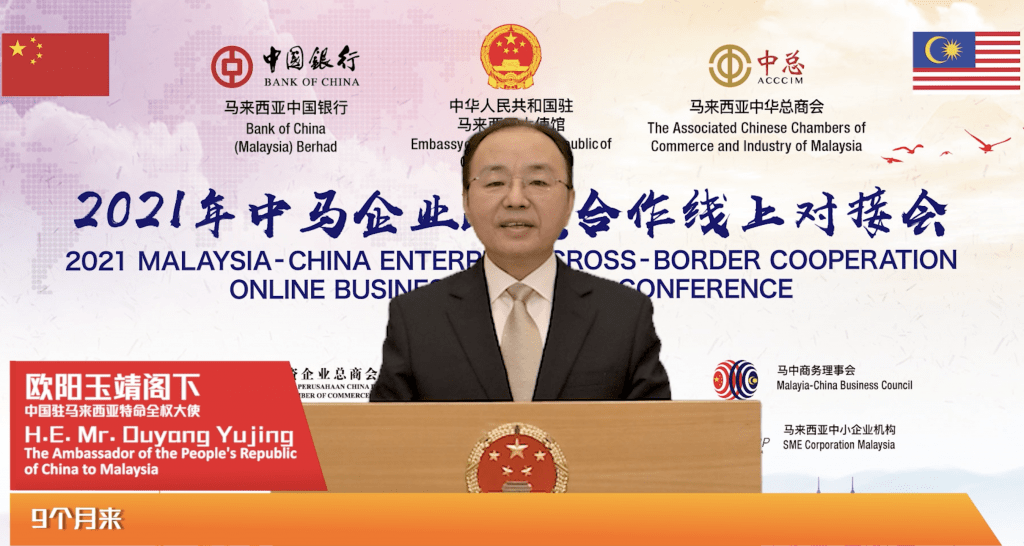 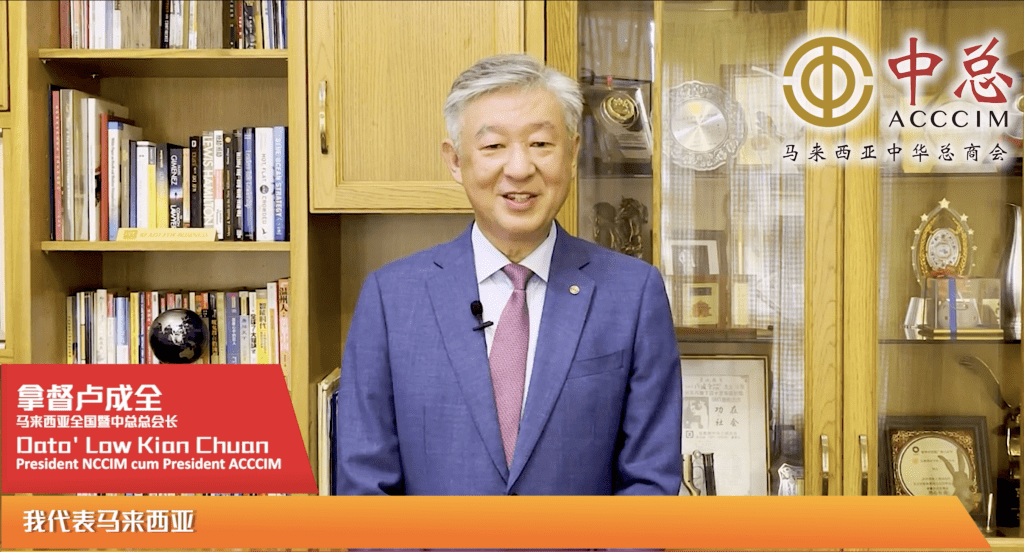 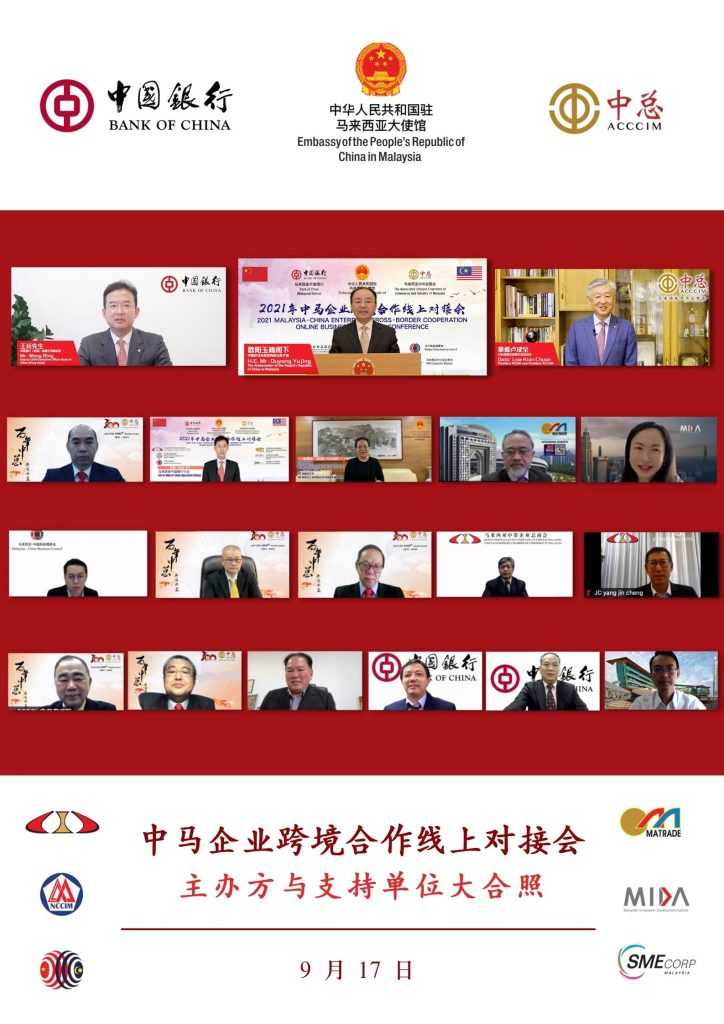 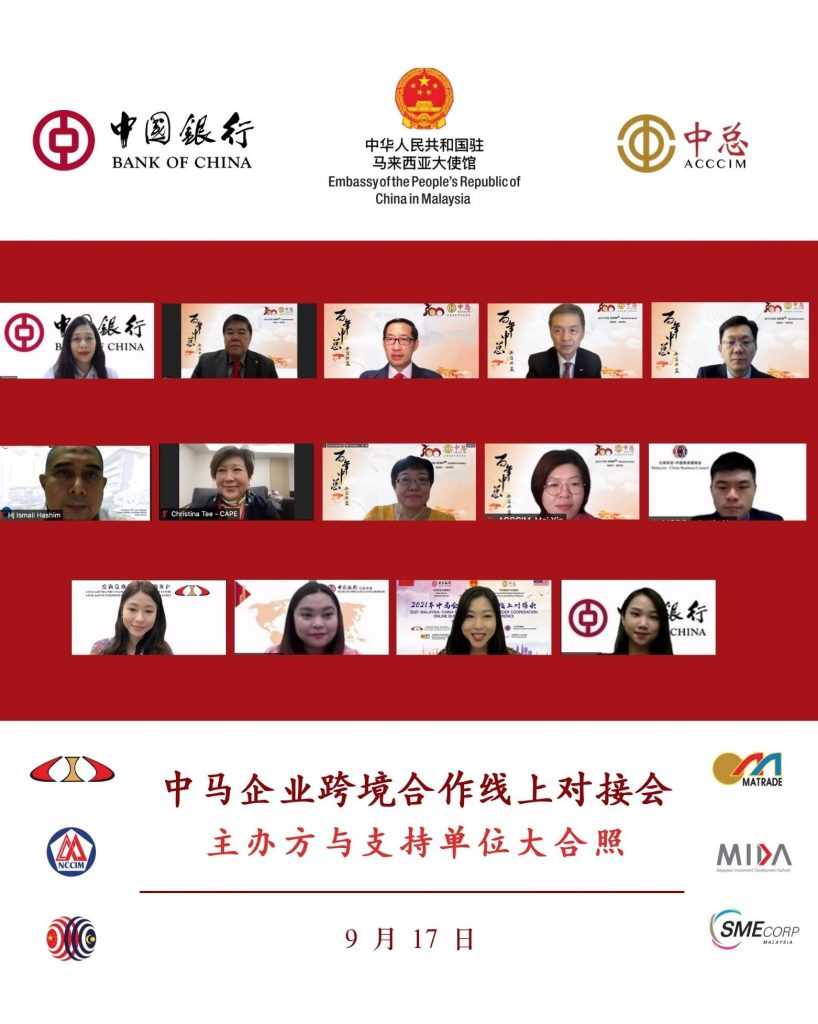 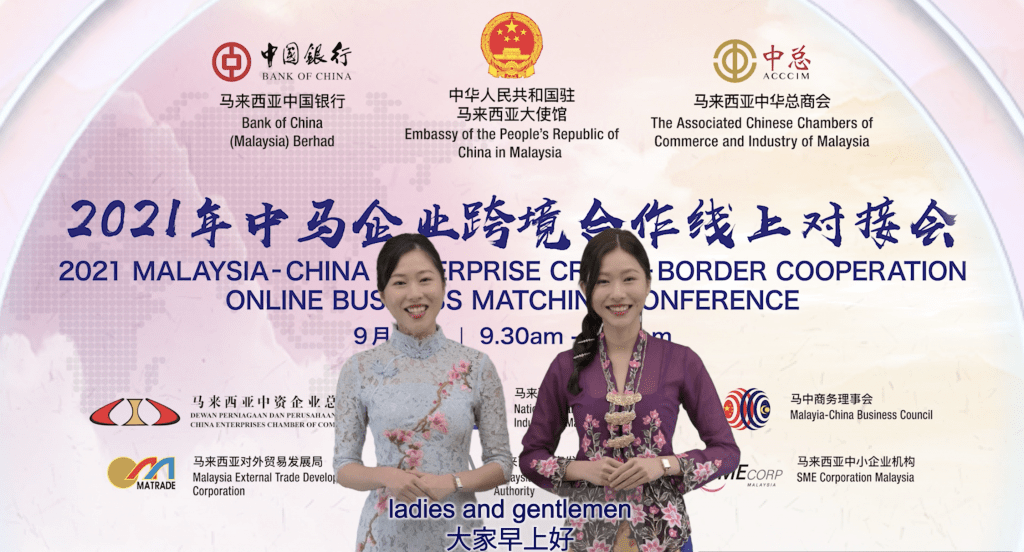 On 17th September 2021, “2021 Malaysia-China Enterprise Cross-border Cooperation Online Matchmaking Conference” co-organized by the Embassy of the People’s Republic of China in Malaysia, The Associated Chinese Chambers of Commerce and Industry of Malaysia (ACCCIM) and Bank of China (Malaysia) Berhad was held successfully. China Enterprises Chamber of Commerce in Malaysia (CECCM) has been the supporting partners for the third time after 2018 and 2019 to jointly promote economic and trade exchanges between Chinese and Malaysian enterprises.

The theme of the business matching conference is “China-Malaysia work together hand-in-hand to create new opportunities”. It aims to build an excellent cooperation and exchange platform for Chinese and Malaysian companies. This can also develop bilateral economic and trade development for China and Malaysia despite the pandemic. The opening ceremony invited three representatives of the main organizers to deliver speeches respectively. Special guests included H.E. Mr. Ouyang Yujing, Ambassador Extraordinary and Plenipotentiary of the People’s Republic of China to Malaysia, Dato’ Low Kian Chuan, President of the Associated Chinese Chambers of Commerce and Industry of Malaysia (ACCCIM) and Mr. Wang Bing, Deputy Chief Executive Officer, Bank of China (Hong Kong) Ltd delivered speeches and officiated the opening ceremony virtually. The event was well-received with more than 1,000 Chinese companies and 215 Malaysian companies. After careful consideration and selection by the organizer, 327 Chinese companies and 109 Malaysian companies participated in the event.

H.E. Mr. Ouyang Yujing, Ambassador Extraordinary and Plenipotentiary of the People’s Republic of China to Malaysia stated that China and Malaysia have experienced changes and historical ups and downs since the establishment of diplomatic relations 47 years ago. Over the past years, China-Malaysia comprehensive strategic partnership has entered a stable, healthy and pragmatic development track. Both countries have joined hands in fighting the pandemic, actively promote the vaccination program, accelerated the “Belt and Road” initiative, at the same time steadily promoted major projects such as the “Two countries, twin parks”. According to statistics, China-Malaysia bilateral trade volume and China’s non-financial investment in Malaysia have risen against the trend. As of the first half of 2021, they have increased by 43.9% and 76.3% respectively. China has also been Malaysia’s largest trading partner for 12 consecutive years, and has become the largest source of foreign investment in the Malaysian manufacturing industry for 5 consecutive years. China enterprises in Malaysia have played a positive role in Malaysia’s industrial and social development. In addition to providing Malaysia with good talent training and employment opportunities, they also brought a large amount of foreign exchange income to Malaysia. Ambassador Ouyang firmly believes that after the pandemic situation improves, China-Malaysia cooperation in the fields of economy, trade and investment will usher in a new round of development where the two countries will continue to deepen the alignment of development strategies under the framework of the “Belt and Road” initiative, and cultivate new drivers of cooperation. This will continue to create new highlights in cooperation and continuously improve the level of economic and trade cooperation between the two countries.

Dato’ Low Kian Chuan, President of the Associated Chinese Chambers of Commerce and Industry of Malaysia (ACCCIM) stated that, as the leading association of the Chinese Chambers of Commerce in Malaysia, ACCCIM has always been dedicated to serve as a link between the Government and business community, encouraging the business community to innovate and improve on a constant basis in order to develop the country’s economy. In response to the needs of pandemic prevention and control, the organizers conformed to the new normal by organizing this Business Matching Conference virtually, allowing Malaysian and Chinese companies to connect. It is undeniable that the pandemic is like a “fast-forward key”, catalyzing the growth of the company, and it is a test to every company’s ability to handle crisis. He hoped that the enterprises of the both countries could take this opportunity to turn the crisis into an opportunity and create new achievements amidst the challenges.

Mr. Wang Bing, Deputy CEO of Bank of China (Hong Kong) stated that since June 2015 to September 2019, Bank of China had held three SME business matching conference in Kuala Lumpur. More than 800 SMEs from both China and Malaysia with over 1200 representatives attended the event. The digital apps, “E-Cooperation” is a matching platform initiated and launched by Bank of China. Currently, Bank of China has held 81 matching events worldwide where the “E-Cooperation” apps provided precise business matching services to nearly 40,000 enterprises in 125 countries across five continents in the world. The platform has gathered nearly 300,000 Chinese and foreign companies where it has also received positive reviews from these companies in helping them to achieve a series of business cooperation such as trade, investment, and technology.

The organizer and representatives of various supporting organisations also watched the opening and ceremony online and took a group photo via zoom meeting. There were 173 business negotiations and 102 cooperation achieved. The opening ceremony was broadcasted simultaneously on the Facebook of the Embassy of the People’s Republic of China in Malaysia, the Associated Chinese Chamber of Commerce in Malaysia (ACCCIM), Bank of China (Malaysia) Berhad, and China Enterprises Chamber of Commerce in Malaysia (CECCM), as well as on the E-Corporation apps. The number of viewers exceeded tens of thousands and the social response was overwhelming. CECCM would like to extend our gratitude and hoped that China and Malaysia enterprises will continue to work hard and make positive contributions to the economic development of Malaysia-China.

Both Executive Secretary of China Enterprises Chamber of Commerce in Malaysia (CECCM), Hung Ling and Yuan Ling was the emcee of the event. The opening ceremony was hosted in both Chinese and English to ensure the smooth running and clear understanding for all participants. 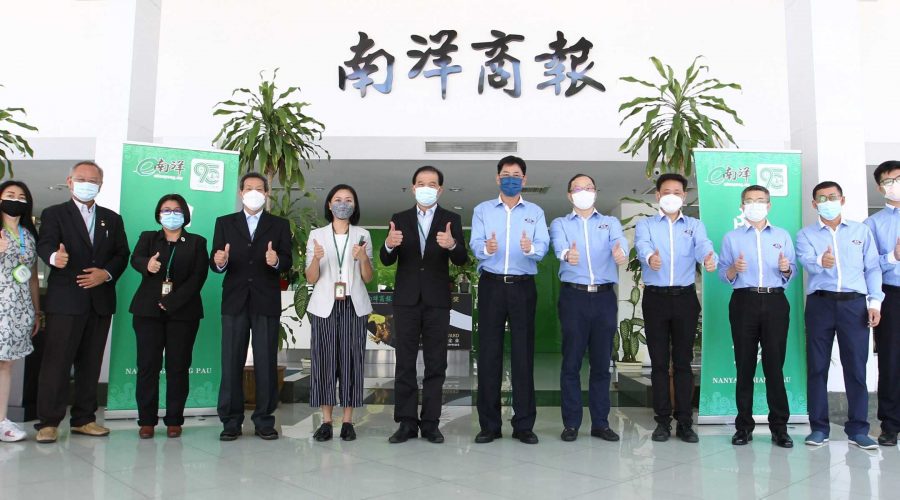 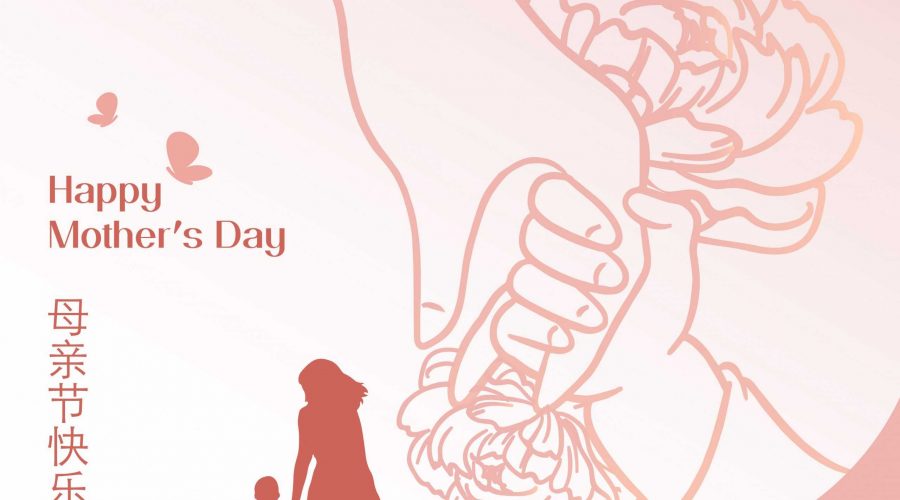